The partially-eclipsed moon at 6:04 am EDT, one minute before the start of nautical twilight and still somewhat obscured by clouds. The weather forecast for the eclipse was uncertain and there had been rain overnight. However, the clouds largely cleared out by the start of totality at 6:25 am. Taken with a Canon EOS 6D digital SLR camera and a Canon 70-200 mm f/2.8L zoom lens (on a fixed tripod) set to 200 mm focal length; exposed 4 seconds at f/5.6, ISO 400. Mildly cropped to eliminate some utility poles and wires at the bottom of the frame.

The partially-eclipsed moon at 6:13 am EDT with a few scattered clouds nearby, but Uranus and several stars are visible (mouseover for labels). Same camera, lens and focal length as the previous image, but moderately cropped; exposed 2 seconds at f/5.6, ISO 400. 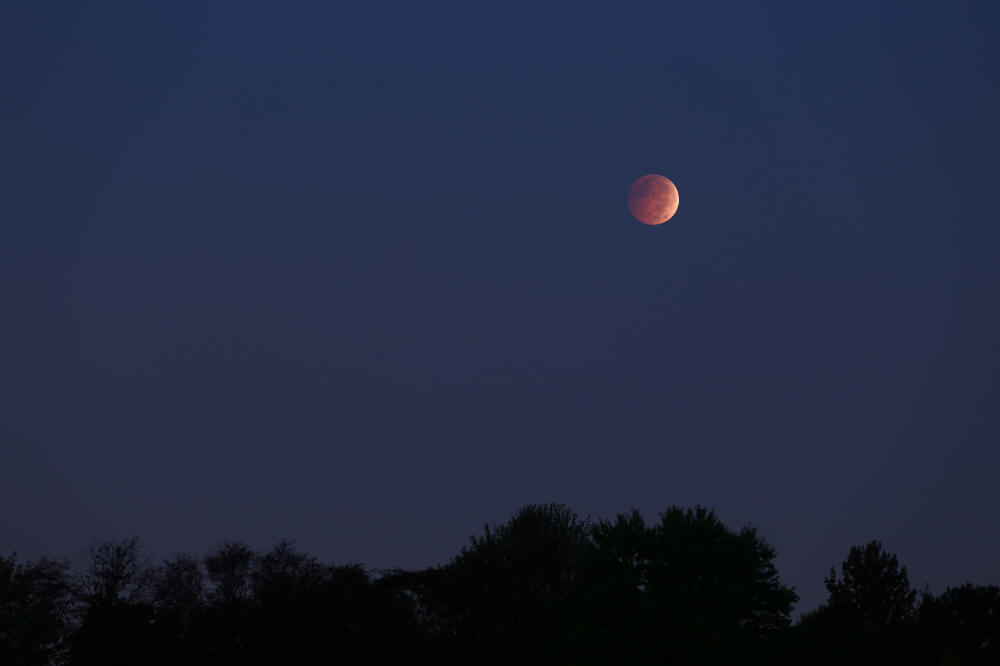 This is the same picture that was on my home page in October 2014 showing the moon at 6:27 am EDT, two minutes after the start of totality, when it was at 7° altitude. Same camera, lens and focal length as the previous images, but not cropped; exposed one second at f/5.6, ISO 800.

This image is a significant crop of the previous picture to show Uranus (magnitude 5.7) to the left of the totally-eclipsed moon and the star HD 4628 (magnitude 5.8) below the moon (mouseover for labels). Uranus was easily visible in 16x70 binoculars and only a bit less easily seen in 10x42 binoculars during the eclipse (before twilight became too bright). See the footnote at the bottom of the page for a rough calculation of the lunar movement based on the two close-up pictures.

The view at 6:38 am EDT when the moon was at 5° altitude in a brightening sky, two minutes after the start of civil twilight. With the decreasing altitude, the foreground soybean field can now be seen. Same camera and lens as before (not cropped); exposed 1/4 second at f/5.6, ISO 800.

The view at 6:42 am EDT when the moon was at 4° altitude in a relatively bright sky, such that the eclipsed moon is barely visible (mouseover for label), while the tree foliage now displays a little autumn color. Same camera and lens as before (not cropped); exposed 1/8 second at f/5.6, ISO 800. The eclipsed moon was last seen visually with 10x42 binoculars at 6:50 am, when it was about 2¾° apparent altitude. This morning-twilight eclipse was reminiscent of the total lunar eclipse I observed in morning twilight from Coyle Field on August 28, 2007. Click here for more.

Here's a view of the observing site, Swede Run Fields in Moorestown, NJ, taken at 7:03 am EDT with the Canon 6D and a Canon 24-105 mm f/4L zoom lens set to 24 mm focal length (not cropped). Exposed 1/40 second at f/4.5, ISO 100, handheld. The first picture on this page was taken from the parking area in the foreground, hence the utility poles and wires that needed to be cropped from the frame. Subsequent pictures were taken from the paved pedestrian path on the other side of Westfield Road (which runs between the soybean fields). Note the dark band just above the tree line, it's the earth's shadow (the same shadow extending to the moon, which has now vanished behind the trees in the brightened sky). The pinkish band above that is the Belt of Venus, which is the result of sunlight refracted by earth's atmosphere.

Here's a view looking east-northeast across the parking area at Swede Run Fields. Taken at 7:02 am EDT with the Canon 6D and a Canon 24-105 mm f/4L zoom lens set to 24 mm focal length (not cropped). Exposed 1/50 second at f/5, ISO 100, handheld. The sun will be rising momentarily at 97° azimuth, towards the right side of the frame. There was a possibility of seeing a selenelion (both the sun and the totally-eclipsed moon visible at the same time) since sunrise was at 7:03 am and moonset was at 7:08 am (full moon was at 6:51 am and mid-eclipse was at 6:55 am). However, I never really looked because as previously noted, the totally-eclipsed moon was last seen with binoculars at 6:50 am, after which it was washed out by the brightening sky. Clouds just above the eastern horizon might also have obscured the newly-risen sun temporarily.

Return to the Previous Page

Return to the SJAstro Home Page

In the second picture from the top, taken at 6:13 am, the star HD 4628 is 18% of a lunar diameter from the limb of the moon (5.5 mm away vs. 30.5 mm diameter as measured on my screen). In the fourth picture, the close-up taken at 6:27 am, HD 4628 is 42% of a lunar diameter from the limb (23 vs. 55 mm). Based on these rough measurements, the moon moved 42 - 18 = 24% of its own diameter in 6:27 - 6:13 = 14 minutes, or 23% of an hour. This corresponds with the well-known nominal lunar motion of its own diameter every hour. Correspondingly, if one draws a straight line between Uranus and HD 4628 in the second picture, it crosses the edge of the moon's disc. In contrast, there's a distinct gap between the moon and a similar straight line drawn in the fourth picture (Uranus would have moved slightly in that time span too, but only about an imperceptible arc second). Return to the fourth picture.