The image above is a 40% crop of the same original frame as the wider-field image (mouseover for labels).

On March 30, 2016, comet 252P/LINEAR was at 27½° altitude, and just 2½° from the 63% illuminated gibbous moon, as observed from Swede Run in Moorestown, NJ. Both objects were in the constellation Ophiuchus the Serpent Bearer. The moon is just outside the bottom edge, although considerable flare from it still intrudes into the frame. Ignoring the moon flare, no sign of the comet is visible in the image, even though 9.x magnitude stars are present near the position indicated by SkyTools (mouseover for labels) and a few recent estimates put 252P around magnitude 6.5. The comet was also unseen with 16x70 binoculars and a 12.5-inch Newtonian telescope at 66x and 113x. Normally, I wouldn't think of looking for a comet this close to such a bright moon, but this was the first clear morning since rapidly north-moving 252P entered the sky at our 40°N latitude on March 24, 2016. I had also looked on the morning of March 26 with 16x70 binoculars when the moon was 49° away, but was foiled by thin to thick clouds. The picture was taken with a Canon EOS 6D digital SLR camera and a Canon EF 70-200 mm f/2.8L zoom lens (on a fixed tripod) set to 200 mm focal length, then cropped to about 29% of the original size. It's a single exposure of 2 seconds at f/4, ISO 3200, using 3800K color balance. The frame is about 5.8° wide x 3.8° high. 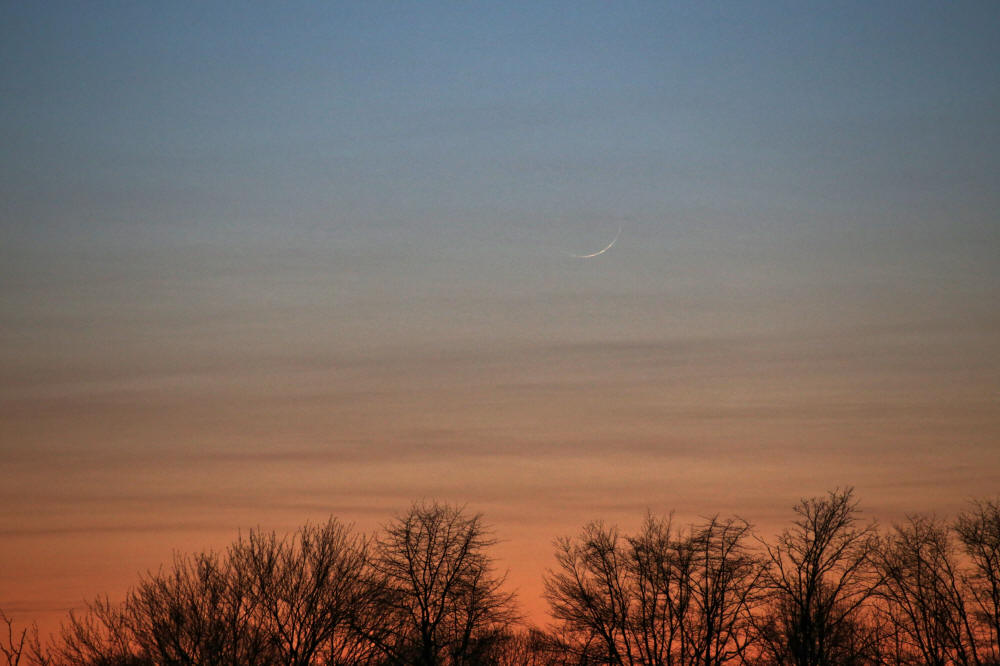 Here's another attempt to spot the great globular cluster, Omega Centauri (NGC 5139). I tried again on February 21, 2016, from Moorestown, NJ, near the intersection of Borton Landing and Hartford Roads (about a mile from the WAS meeting site). I searched between 3:00 and 3:30 am EST with 16x70 binoculars, but alas, Omega was not seen (it transited the meridian at 3:25 am). Complicating the search, there was a 98% illuminated moon above/behind my right shoulder (it will be full on February 22nd at 1:20 pm EST).

I also tried to capture it photographically, but again, no success. This representative image was taken at 3:15 am using a Canon 6D digital SLR camera (on a fixed tripod) and a Canon 100 mm f/2.8L macro lens (then cropped to about 10° square). It was exposed 4 seconds at f/2.8, ISO 800 (which is about 2.5 stops less exposure than the following picture from East Point, due to a brighter sky from moonlight and suburban light pollution). The camera's internal GPS indicated a location of 39°59'17"N, 74°54'31"W. My reference stars for finding Omega, the Nu & Mu Cen pair leading down to the Upsilon 1 & 2 Cen pair, then down to Zeta Cen, are all apparent in this image (as they were in the 16x70s too). Zeta is at 2½° altitude, while Omega would have been at 2¾° altitude, 5° to the right of Zeta. Despite trying extreme adjustments of brightness and contrast, no hint of Omega was revealed in any of the pictures from this set. The peculiar galaxy, Centaurus A (4½° above Omega), was also absent in the images as well as visually with the binoculars. Mouseover for labels; the nominal positions where Centaurus A and Omega Centauri would have been are circled.

The great globular cluster, Omega Centauri (NGC 5139), was spotted with 16x70 binoculars on February 18, 2016, from East Point, NJ, at 3:40 am EST, several minutes after it transited the meridian at 3:37 am. However, murky conditions above the horizon precluded a good view, and except for a couple of minutes around 3:40 am, Omega was difficult to see at all. East Point is on the northern shore of the Delaware Bay at Maurice River Cove, and the view from East Point pictured above looks due south towards the Atlantic Ocean through the dark gap between Cape May, NJ, and Lewes, DE. This image is a single frame captured at 4:01 am EST with a Canon EOS 6D digital SLR camera (on a fixed tripod) and a Canon 100 mm f/2.8L macro lens (providing a field about 20° wide x 14° high). It was exposed 4 seconds at f/3.2, ISO 6400. Omega Centauri was at 3°21' apparent altitude, and the peculiar galaxy Centaurus A (NGC 5128) is vaguely visible 4½° above Omega. It too is visible with binoculars from East Point. Mouseover for labels. The stars Nu and Mu Centauri are a good starting point for finding Omega. They're relatively easy to spot with unaided eyes, and with binoculars from there, drop down to Upsilon 1 & 2 Cen, then drop again to Zeta Cen. Move 5° to the right, and there's Omega.

On February 5, 2016, I went to Coyle Field in Woodland Township, NJ. Here's the view at 10:13 pm EST looking south towards Atlantic City (30 miles away). Most of the accumulation from a heavy snow on January 23rd had dissipated, but there was a light snow overnight on February 4/5 that whitened the ground again. Luckily, there was a bare space on the runway along the berm to set up my scope. Sirius and Canis Major are in the sky above the car, Orion is above-right of that, while Procyon and Canis Minor are near the upper-left corner. Some winter Milky Way is even visible diagonally left  of Sirius. Streaks from a few aircraft are also present. Taken with a Canon EOS 6D digital SLR camera on a fixed tripod and a Sigma 20 mm f/1.4 DG HSM lens. It's a single frame exposed 8 seconds at f/2, ISO 3200, custom white balance. Mouseover for labels.