On August 13, 2016, I went to Swede Run in Moorestown, NJ, to look for the planets Jupiter, Mercury and Venus, which are converging in the west after sunset. Jupiter and Venus were about 14° apart, while Mercury was 6° from Jupiter and 9° from Venus (but a few degrees below a straight line between the other two). Jupiter was easy to spot with 10x50 binoculars at 8:20 pm EDT, then it was readily visible with unaided eyes. However, even though the sky was generally quite clear, not too far to the right of Jupiter, there was a dense cloud bank that extended from the west to the north and a dozen or so degrees above the horizon. The left edge of the cloud bank was a bit ragged and I finally picked out Mercury in a clear spot with the 10x50s at 8:27 pm, and Venus with the 10x50s at 8:35 pm when it dropped into a narrow gap between the clouds and the tree tops. While I was looking during relatively bright twilight, I noticed light flashing in the clouds, which intensified as twilight darkened, eventually putting on a pretty impressive lightning show in the distance. This picture of the lightning was captured at 8:43 pm with a handheld Canon 6D digital SLR camera and a Canon 40 mm f/2.8 STM pancake lens (then cropped a bit). It was exposed 1/15 second at f/2.8, ISO 12,800 (fully automatic mode).

This was my first naked-eye sighting of the heliacal rising this year. I first saw it on August 4, 2016, at 6:03 am (one minute after sunrise) with 16x70 binoculars when it was at 2.5° altitude, but I haven't had the opportunity to look between August 4 and 13. This morning, it wasn't that difficult to see with unaided eyes and I was able to follow it at least through 5:53 am (6.5° altitude) when I left the site. I suspect that Sirius could be spotted naked-eye at least a couple of days before August 13 if the weather was favorable. Here's a tabulation of my heliacal sightings of Sirius for the span from 2012 (when I started paying attention to it) through 2016. Here's a nice Sky & Telescope article by Bob King about the heliacal rising of Sirius.

On August 25, 2016, at 5:25 am (63 minutes before sunrise), while putting out the trash at home in Maple Shade, NJ, I couldn't help but notice Sirius blazing in a still fairly dark sky. 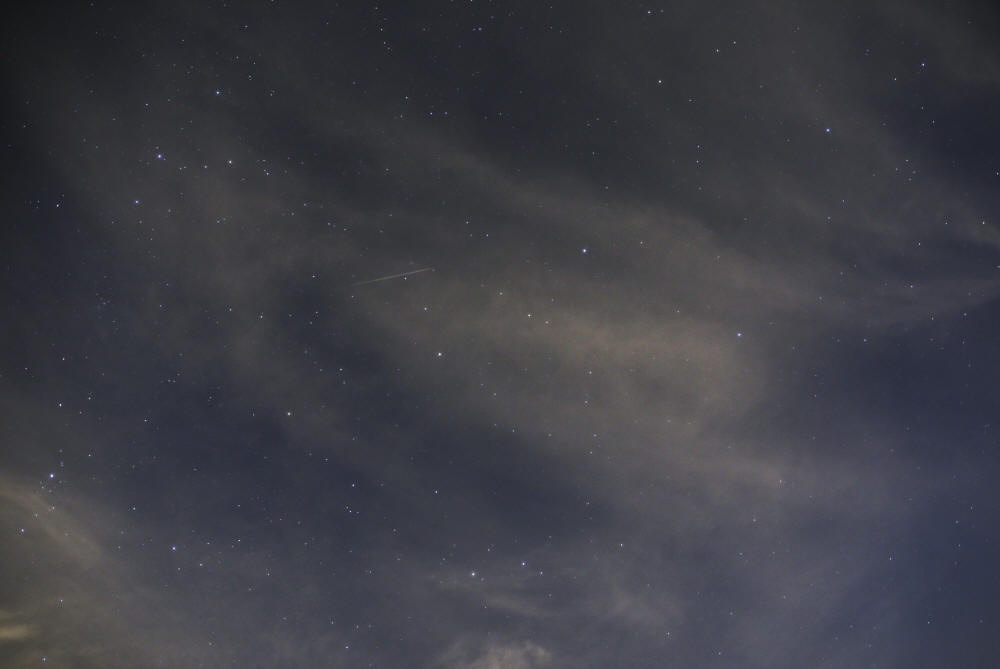 A Perseid Meteor was captured at 1:50 am EDT on August 12, 2016, from Swede Run in Moorestown, NJ. The meteor's six-degree-long trail passes just below M31, the Andromeda Galaxy (mouseover for labels). Conditions were not ideal for meteor observing due to the clouds and haze, and only a few were seen visually during the time there from about 1:15 to 2:45 am. One wonders how bright the pictured meteor would have been if the sky was clear (this one was not seen visually, and the stars in the picture were not as bright or numerous visually). Taken with a Canon 6D digital SLR camera on a fixed tripod and a Sigma 20 mm f/1.4 lens. Exposed 10 seconds at f/2, ISO 400 with tungsten white balance. An intervalometer was used to trigger successive ten-second exposures between 1:25 and 2:31 am, but the vast majority of the 279 frames captured were devoid of meteors (scroll down for an update). Here's a Sky & Telescope article on the Perseids.

The image below is a magnifying crop of the meteor trail from the image above (mouseover for labels).

This picture was captured at 9:04 pm EDT on August 7, 2016, when the Crescent Moon was five days old and 25% illuminated. The moon moved eastward from its position in the picture on August 5 and is now 22½° from the planet Jupiter in the bottom-right of the frame. Since the sun set at 8:06 pm, the clouds are truly crepuscular, which is just an overused adjective for twilight that is often applied to sun rays (correctly for those apparent soon after sunset or before sunrise, but not so correctly for those at other times of the day). In addition, the clouds seemed to have "radiated" from the direction of the sunset, a characteristic of true crepuscular rays. Regrettably, the clouds interfered with seeing Mercury and Venus earlier in twilight. Both were spotted briefly in 10x50 binoculars through cloud gaps (Venus was also seen briefly with unaided eyes), but when this picture was taken, Venus had already set and Mercury was behind the trees outside the frame to the right. Taken from Swede Run in Moorestown, NJ, with a Canon 6D digital SLR camera (on a fixed tripod) and a Canon 24 to 105 mm f/4L zoom lens set to 60 mm focal length, providing a field about 33° wide x 22° high. Exposed 2 seconds at f/5.6, ISO 1600. The bright crescent is greatly overexposed and saturating the sensor well beyond its actual extent, but a bit of the silvery, earthshine-illuminated disc remains visible on the left.

Jupiter and the Crescent Moon
August 5, 2016 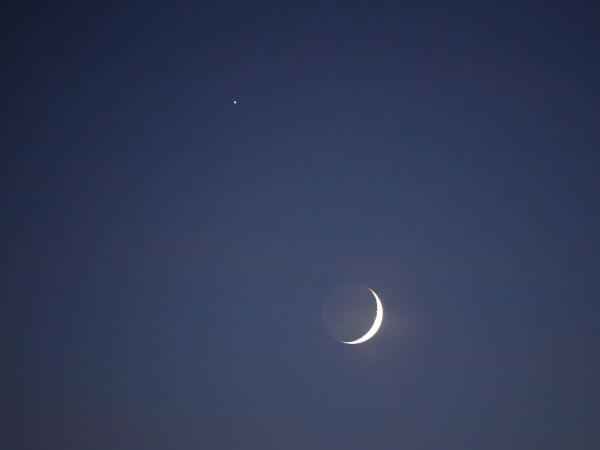 Mercury and the Crescent Moon
August 4, 2016

On August 4, 2016, Mercury was 1½° (center-to-center) from the 5.0% illuminated Crescent Moon, which was 51 hr 33 min old when this image was captured at 8:18 pm EDT (8 minutes after sunset) from Swede Run in Moorestown, NJ (mouseover for labels). Taken with a Canon 6D digital SLR camera (on a fixed tripod) and a Sigma 70 to 300 mm f/4-5.6 apo zoom lens set to 300 mm focal length, then cropped to 39% of the original dimensions for a field 2.7° wide x 1.8° high. Exposed 1/250 second at f/5.6, ISO 500. Once located with 10x50 binoculars at 8:08 pm, the Moon's crescent was not difficult to see with unaided eyes, but Mercury was not seen with unaided eyes or the binoculars before it, and the moon, dropped behind a slow-moving cloud bank a few minutes after taking this picture (and the clouds persisted until after Mercury set at 9:14 pm). Venus was spotted with the 10x50s just below the clouds at 8:06 pm, then was covered moments later and not seen again. Click here for a summary of the Mercury sightings during its 2016 elongations.

There were still clouds along the west-northwest horizon at Swede Run when this image was captured at 9:02 pm EDT on August 4. Venus, Mercury and the Crescent Moon are no longer visible (Venus had set at 9:00 pm while Mercury and the Moon were behind the clouds and trees before setting at 9:13 and 9:14 pm respectively). However, magnitude -1.8 Jupiter is now prominent at the left side of the frame (and easily visible to unaided eyes too). Taken with a Canon 6D digital SLR camera (on a fixed tripod) and a Sigma 70 to 300 mm f/4-5.6 apo zoom lens set to 100 mm focal length (for a field 20° wide x 14° high). Exposed 1/10 second at f/4, ISO 12,800.

The greater crop below (12% x 10% of the original for a field about 1.2° x 0.7°) better shows the Galilean satellites, from left to right, Callisto, Ganymede (Jupiter) and Io. Europa is very close to the left limb of Jupiter and is not resolved here.

The planets Mars and Saturn, as well as the star Antares, remained in a compact triangle on July 26, 2016, when this view of them was captured at at 9:09 pm EDT from Swede Run in Moorestown, NJ. Taken with a Canon 6D digital SLR camera on a fixed tripod and a Canon 40 mm f/2.8 STM "pancake" lens (plus a diffusion filter), then cropped to 50% of the original size to provide a field about 24° x 16°. Exposed 0.7 seconds at f/2.8, ISO 1600. Mouseover for labels. Despite the nearby stick figure of Scorpius, Mars is in the constellation Libra and Saturn is in Ophiuchus With these two planets to the east, Venus and Mercury to the west and Jupiter more-or-less in the middle, all five classical planets that were visible to the unaided ancient eye were visible along a nominal 110° swath of the ecliptic (as shown in the several preceding images). Of course, the earth was visible too, but I don't think the ancients considered it one of the celestial wanderers.

The image below is a clip from Stellarium showing these five planets along the ecliptic after sunset on July 27, 2016.