The extremely thin sliver of the Crescent Moon, 0.8% illuminated, had reached 2° altitude when this image was captured at 6:44 am EST on December 28, 2016, 15 minutes after moonrise at 6:29 am, from the old Mart site in Pennsauken, NJ. The moon was only 19 hr 09 min prior to new on December 29 at 1:53 am, and 28.976 days old since the previous new moon on November 29 at 7:18 am. Solar elongation was 9°14'. Taken with a Canon 6D digital SLR camera and a Canon 400 mm f/5.6L telephoto lens on a fixed tripod (then cropped to 32% of the original size for a field about 1.7° wide x 1.1° high). Exposed 1/30 second at f/5.6, ISO 3200. Mouseover for label. Note: The tree in this picture is the same one that stands above the others to the right of the pair of utility towers in the pictures of the old crescent moon on November 28 shown further down this page. It's not pictured here, but the planet Saturn was spotted just below the bottom edge of the cloud mass at 6:25 am, which soon covered it. Saturn was at solar conjunction on December 10, 2016.

The thin crescent was initially spotted visually at 6:40 am with 16x70 binoculars when it was near the upper right of the tree, then followed until 6:45 am when it was lost behind the bottom edge of the cloud mass that had descended to the utility wire just above the thin crescent in this picture. So visually, the moon was last seen when it was 19 hr 08 min from new, which is my personal record for the minimum time span between the moment of new and the sighting of the thin crescent (either before or after new). My previous record was 20 hr 01 min old for the young moon on February 3, 2011.

What was unusual compared to my experience recently was the cloud situation. Frequently, I would find that when leaving my home for the Mart site before sunrise, the sky was generally clear (often, quite clear), but upon arrival at the Mart, the band of sky above eastern horizon would be cloudy, obscuring the object that I had hoped to observe. This time, the sky was mostly cloudy, but it was relatively clear along the horizon, which provided a narrow window to see this thin crescent. I'm now hoping for clear skies on Thursday evening, December 29, for an opportunity to see the even thinner crescent (0.5% illuminated) of the young moon, roughly 15 hours after new (for a combined span from before new moon to after new moon of a little more than 34 hours). Even with excellent transparency, it will be a very challenging observation.

Update December 29: It was cloudy for most of the day, with periods of rain, but after 4 pm, there appeared to be some clearing above the western horizon, so I headed to the Maple Shade, NJ, baseball field complex. There was an approximate 5° high cloud-free band along the horizon (extending at most a few degrees above the distant tree tops), but the transparency in that band seemed less than ideal. In any case, I looked for the thin crescent with 16x70 binoculars from about 4:50 pm (7 minutes after sunset) to 5:11 pm EST (when the moon was at 2° altitude, 15 minutes before moonset). Not surprisingly, I did not detect even a hint of the thin crescent. Tomorrow evening, December 30, the moon will be about 39 hours old, 3% illuminated and 12° altitude at at 5 pm, so it will still be an attractive sight.

On Monday, December 12, 2016, the nearly-full moon (full on December 13th at 7:06 pm EST) would occult the first-magnitude star Aldebaran, in Taurus, about 11:11 pm EST in the Philadelphia area. Since the moon was travelling eastwards through the Hyades star cluster earlier in the evening on its way to Aldebaran, several less-bright stars would be occulted beforehand too. Notably, the naked-eye double, Theta 1 & 2 Tauri (magnitude 3.8 and 3.4 respectively). I stepped out front of my Maple Shade, NJ, home with 16x70 binoculars and saw Theta 1 disappear at 7:21 pm and Theta 2 at 7:32 pm. Aldebaran was easily visible with unaided eyes a couple of degrees east of the moon. I went back out at 8:10 pm to catch the reappearance of the Thetas and the disappearance of magnitude 4.8 HD 28527, but I was already too late for Theta 2, and I never did see Theta 1 and HD 28527 by time I returned inside at 8:20 pm because thin clouds covered the sky around the moon. I was hoping to see the shrinking gap from the moon to Aldebaran, but the latter was no longer visible with unaided eyes, although it was still readily apparent with the 16x70s.

Finally, I went out to the back yard around 10:30 pm to set up my camera for the Aldebaran occultation, but was I greeted by even thicker clouds that produced a distinct 22° halo around the moon as pictured above (the moon is greatly overexposed to show the halo). Taken at 10:34 pm with a Canon 6D digital SLR camera (on a fixed tripod) and a Sigma 20 mm f/1.4 Art lens. Exposed 1/30 second at f/2.2, ISO 12,800. Orion is at the 7 to 8 o'clock position near the outer edge of the halo, and Capella is the bright star perpendicular to the 11 o'clock position on the halo (mouseover for labels). Using 10x50 binoculars, Aldebaran was varyingly visible close to the moon (sometimes invisible) as the density of passing clouds varied.

I went back in the house briefly just before 11 pm, and with pessimism, stepped back out at 11:08 pm. However, I was astonished to find the moon in a clear patch of sky. I could see Aldebaran close to the moon's limb with 10x50 binoculars, and it seemed to disappear into a crater about 11:12 pm (as best as I could tell by trying to read my wristwatch in the dark). I also took a few quick snapshots before picking up the binoculars. The one above being the next-to-last, which shows a narrow gap between Aldebaran and the moon at the approximate 9 o'clock position. It was taken at 11:10:28 pm (the camera's clock is set by its internal GPS; the very last image 14 seconds later looked a bit blurred, as if from vibration). Taken with a Canon 7D Mk II digital SLR camera plus a Kenko 1.4x teleconverter and a Canon 400 mm f/5.6L telephoto lens (on a fixed tripod) for an effective focal length of 560 mm (then cropped). Exposed 1/20 second at f/8, ISO 1600. The moon, 20 hours before full and 99% illuminated, was greatly overexposed so that Aldebaran would be visible, but note that the proceeding limb (on the left) is a little craggy from craters at the terminator (mouseover for labels).

Mercury has six elongations in 2016. The initial sighting for each of these is tabulated below:

Click here for the sighting details of each elongation for 2016 (the final individual sighting was on December 15th). The current sighting streak at this point is 38 elongations in a row, starting in January 2011, which includes six complete calendar years of six or seven elongations each (click here for sightings from last year's elongations). This demonstrates that locating and seeing Mercury is not nearly as difficult as many suppose. It just takes some planning and a little effort.

The 35% illuminated waxing Crescent Moon was captured several times on December 5, 2016, as shown in these three images. Although they look largely the same, they are in fact three different images. All were taken with a Canon EOS 7D Mk II digital SLR camera and a Canon 400 mm f/5.6L telephoto lens on a fixed tripod. From left to right, the first image was captured with the telephoto lens alone, the second with telephoto lens and a Kenko 1.4x teleconverter and the third had a Kenko 2x teleconverter. Each was cropped to similarly fit a 4:3 ratio frame, then resized and resampled to the same final size (350 pixels wide above, 1200 pixels wide for the larger versions on this page). Exposure details are also noted on that page. Even when looking at the larger versions, I don't see one that is clearly the best.

The view looking a bit south of east from the old Mart site in Pennsauken, NJ, at 5:54 am EST on Monday, November 28, 2016, one minute before the crescent moon would rise, and 65 minutes before sunrise at 7:00 am. This site is little more than a mile from the intersection of 40°N-75°W, and the light just above the tree tops between the two power transmission towers is at 111° azimuth.

Two stars are visible, each at 7° altitude, Zubeneschamali (Beta Librae) in the upper-left corner, and in the upper right corner, Zubenelgenubi (Alpha² Librae, plus its fainter companion, Alpha¹ Librae, 4 arc minutes above it). Zubeneschamali served as a guide for locating the not-yet-visible moon, which would be 40 arc minutes to the right of a perpendicular line from the horizon to the star. Taken with a Canon 6D digital SLR camera plus a Kenko 1.4x teleconverter and a Canon 100 mm f/2.8L macro lens on a fixed tripod (then cropped to 85% of then original size for a field about 12.4° wide x 8.3° high). Exposed 2 seconds at f/5.6, ISO 1600. Mouseover for labels.

When it rose at 5:55 am, the moon was 28.72 days old with respect to the previous new moon on October 30, 2016, at 1:38 pm EDT, and 25 hr 23 min before the next new moon on November 29, 2016, at 7:18 am EST. If spotted after sunset on Wednesday evening, November 30th, the young crescent moon will be about 34 hours old, so a combined time span of less than 60 hours between spotting the old and new moon is possible. However, rainy weather on Wednesday evening precluded any chance of seeing the young moon.

The Crescent  Moon was initially spotted with 10x50 binoculars, and this picture was captured, at 6:05 am EST on November 28, 2016, when the moon reached 1°30' altitude 10 minutes after it rose at 5:55 am (note that altitude is measured from the center of the moon, while moonrise/set, like sunrise/set, is when the upper limb is at the horizon, all adjusted for atmospheric refration). The thin crescent was first seen with unaided eyes at 6:10 am. Taken with a Canon 6D digital SLR camera plus a Kenko 1.4x teleconverter and a Canon 100 mm f/2.8L macro lens on a fixed tripod (then cropped to 71.5% of the original size for a field about 10.4° wide x 7.0° high). Exposed 1/15 second at f/4, ISO 12,800. Mouseover for label. 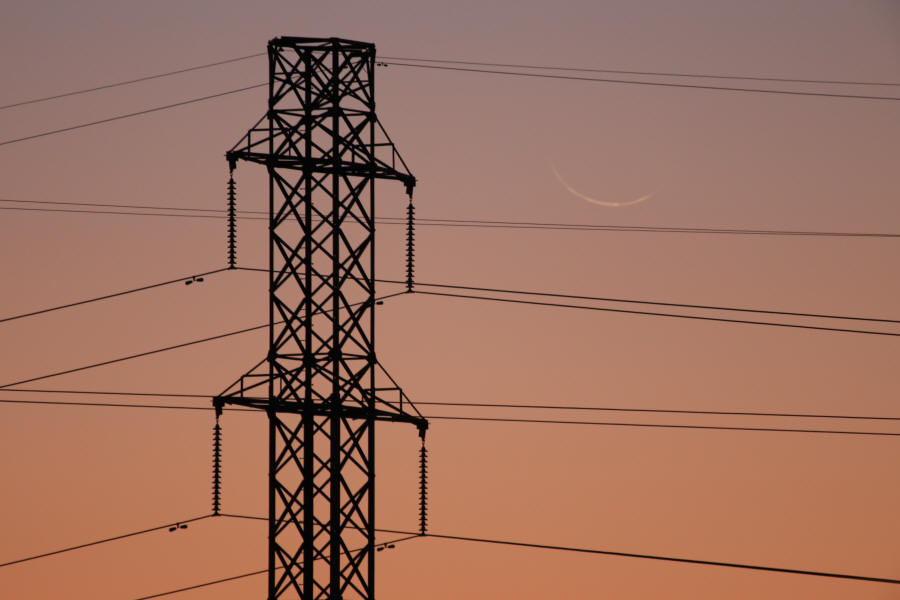 The last sighting with unaided eyes was at 6:30 am. Note that the moon has moved from the bottom-right of the left tower in the previous picture to the top-right of the right tower here. It was last seen with 10x50 binoculars at 6:45 am, 15 minutes before sunrise, when it was 1.0% illuminated, 4°42' altitude, 28.76 days old and 24 hr 33 min before new.