The image below is a magnifying crop of the area from the image above showing open cluster NGC 6939 and galaxy NGC 6946 with the supernova. Mouseover for labels.

Here's an even closer (and very noisey) crop of galaxy NGC 6946 with the supernova (same original image as above). The small-scale patterns used to visually pinpoint the SN in the scope are connected with blue lines on mouseover (here's a negative of the labeled version for printing). V778 Cygni, with a noticeably reddish color, is a silicate carbon star, a carbon star that shows circumstellar silicate dust features.

While at Batsto for the May 20, 2017, WAS Public Star Watch, Barnard's Star was observed. Located in Ophiuchus, near the obsolete constellation Taurus Poniatovii, this red dwarf is interesting because it has the greatest proper motion of any star at 10.3"/year, in large measure because it's just 6 light years away. This picture was captured at 1:19 am EDT on May 21, 2017, with a Canon 7D Mark II digital SLR camera and a Canon 70 to 200 mm f/2.8L zoom lens (on a fixed tripod) set to 135 mm focal length, then mildly cropped. It was exposed 4 seconds at f/2.8, ISO 3200 and 3600K white balance. Mouseover for labels.

The position of Barnard's Star matches well with the position indicated on charts generated with SkyTools and Stellarium, but I found that the position generated with SkySafari Pro (versions 4 & 5) on my iPhone did not match the telescopic eyepiece view. In brief, SkyTools and Stellarium (and perhaps other planetarium programs that I do not have) update the position based on the date of the chart, which can result in a significant movement because of the high proper motion of Barnard's Star. Since the year 2000, it has moved almost 3 arc minutes north, but the Sky Safari chart shows no indication of that movement. In the set of images below, compare the magnified crop of the original picture above with screen captures from SkyTools and SkySafari, both set for the summer of 2017. Mouseover for labels.

Magnifying Crop from the Original Image Above (taken in 2017) 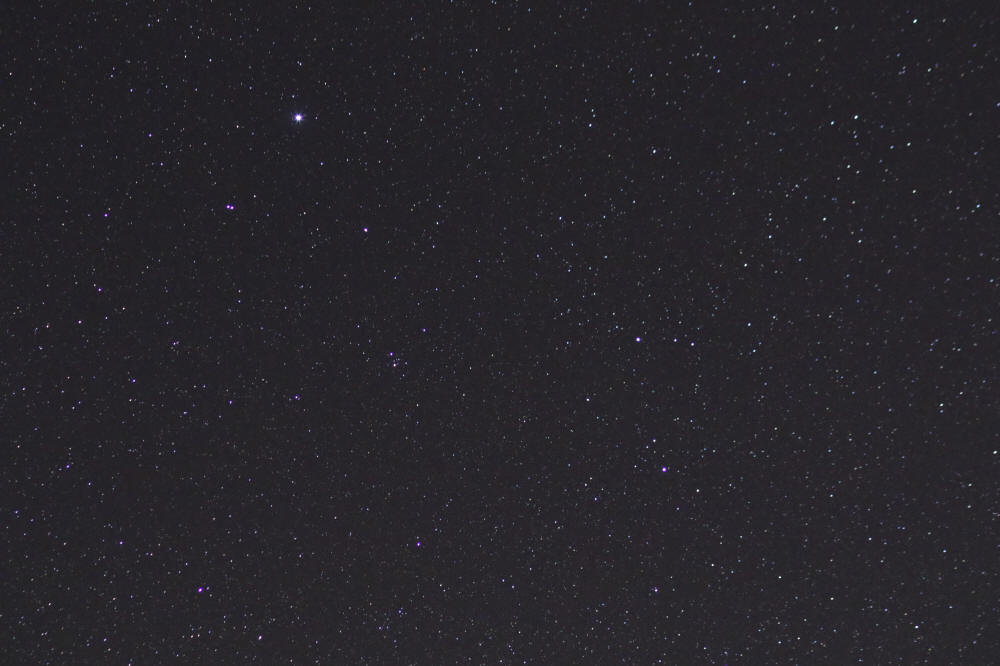 This image of the constellation Lyra was captured at 11:49 pm EDT on May 15, 2017, from Carranza Field in Wharton State Forest, NJ, with a Canon 7D Mark II digital SLR camera, on a fixed tripod, and a Yongnuo 85 mm f/1.8 lens (providing a field 15° wide x 10° high). It's a single frame exposed 4 seconds at f/2.8, ISO 6400, with white balance set to 3800K. Besides size reduction for this web page, no post-exposure adjustments were made. Mouseover for labels.

This is mainly a test of the fast, but inexpensive prime lens. Alas, it shows violet halos around brighter stars here, and it's even worse wide open at f/1.8. Cursory testing shows that at least f/4 is needed to keep the violet halos under control, which diminishes the value of the fast maximum aperture. However, the large aperture does help with composition and manual focusing of a night sky scene in live view mode. Limited testing on ordinary photo subjects suggests the autofocus is noisy, sluggish and uncertain, but I haven't evaluated the effect of violet fringes yet. Update: On May 26, I took a quick snapshot of my friend Bernie during twilight at Tatem Observatory with the 85 mm Yongnuo on the 7D2 (auto-exposed 1/125 sec at f/2, ISO 3200; besides size reduction, no adjustments). Not too bad for a handheld grab shot.

The image below is a magnifying crop of the original image above, better showing the stars Vega, T Lyrae (a reddish carbon star) and Epsilon Lyrae, the "Double Double." Again, besides cropping and resizing for this page, no adjustments were made (such as brightness and contrast). Mouseover for labels.

This magnifying crop of the first image shows the area around M57, the greenish Ring Nebula. Mouseover for labels.

The image below was cropped from the same original image as the one above, with fresh adjustments to brightness, contrast and white balance.

At Carranza Field in Wharton State Forest, NJ, on May 4, 2017, there was a brief window of full darkness between moonset at 2:51 am EDT and the start of astronomical twilight at 4:11 am. With a currently-clear sky and a poor weather forecast for the next few nights, plus a later-setting moon closing the window of darkness anyway, I decided to take advantage of the opportunity to look at comets 41P/Tuttle-Giacobini-Kresak and C/2015 V2 (Johnson). I arrived at 2:40 am, and by 2:45 am, spotted both comets with handheld 16x70 binoculars, 41P about 4° from Vega and Johnson near the western foot of Hercules (although it had recently crossed the border into northeastern Boötes). 41P was not prominent as its low surface brightness coma was somewhat overwhelmed by magnitude 4.3 Kappa Lyrae less than half a degree away. Except for being close to the zenith, which is a difficult direction for handheld binoculars while standing, the view of Johnson was the best I've seen so far. The coma was plainly visible, unlike the vague glow on previous sightings. It may have been enhanced somewhat by its coma overlapping the vertex of a small equilateral triangle of 11th magnitude stars.

While at Carranza Field on May 4, 2017, to look for the comets, I couldn't help but notice the Milky Way running from Cepheus through the Summer Triangle then down towards Sagittarius in the south, and visually, it bordered on being billowing. I wanted to take some test pictures with a new combination of camera and lenses anyway, so this was a good place to start. It's a single frame taken at 3:05 am EDT with a Canon 7D Mk II digital SLR camera (on a fixed tripod) and a Sigma 20 mm f/1.4 Art lens, uncropped for a field 58° wide x 41° high. It was exposed 8 seconds at f/2.0, ISO 3200, using 3600K white balance. Mouseover for labels.

After imaging the Summer Triangle at Carranza Field on May 4, 2017, my attention was drawn to the Galactic Center of the Milky Way above the southern horizon. The respective cloud of stars was rising like celestial steam from the Teapot asterism of Sagittarius, with competition from light pollution out of Atlantic City and Hammonton near the tree line. This is a single frame taken at 3:14 am EDT with a Canon 7D Mk II digital SLR camera (on a fixed tripod) and a Sigma 20 mm f/1.4 Art lens, uncropped for a field 58° wide x 41° high. It was exposed 8 seconds at f/2.0, ISO 1600, using 3600K white balance. Mouseover for labels.