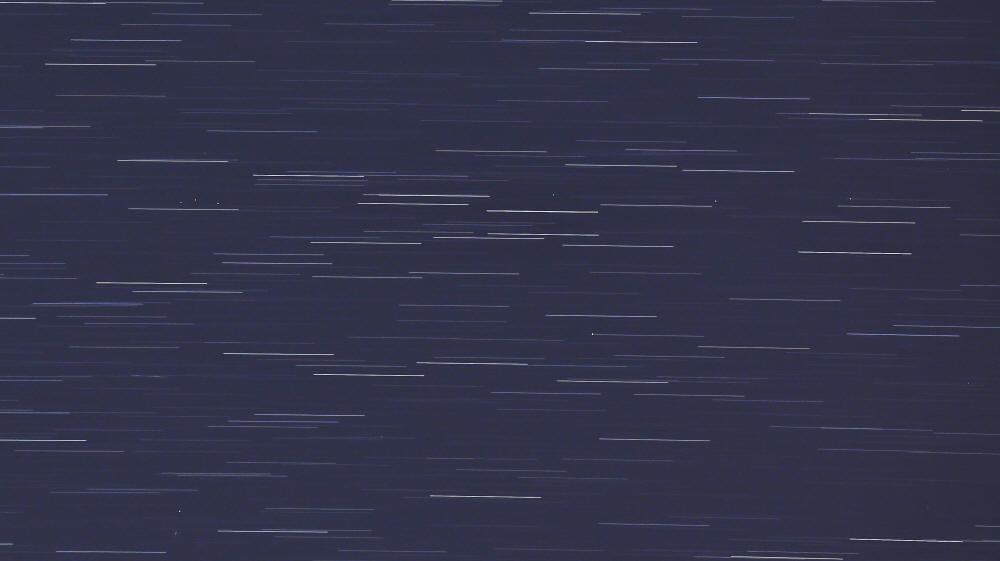 Inspired by Bob King's article at Sky & Telescope online, and the cool, clear fall weather, I went to Carranza Field on the morning of September 29, 2017, to try and capture an image of some geostationary satellites. I also wanted to spot comet C/2017 O1 (ASASSN) for the first time, which I did at 2:14 am EDT with my 85 mm spotting scope. It was just a dim patch of haze, without a tail, about 12° northeast of the Pleiades (about a degree from 55 & 56 Persei).

Back to the picture. It was taken at 2:52 am EDT with a Canon 6D digital SLR camera (on a fixed tripod) and a Canon 200 mm f/2.8L II USM lens, then cropped to roughly 60% of the original size (and to a 16:9 ratio), yielding a field about 6.6° wide x 3.7° high. It's a single frame exposed 180 seconds (3 minutes) at f/4, ISO 400 with 3800K white balance. Long exposure noise reduction was activated, so a 3 minute dark frame was automatically taken and processed by the camera (otherwise, a number of random colored specks were present). Among the numerous star streaks generated by the long exposure, there are nine white point-like objects, presumably geostationary satellites. Given the three-minute exposure near the celestial equator, the streaks are about three-quarters of a degree long: (3 min / 60 min/hr) x 15°/hr.

I'm not particularly good at identifying star-trail fields, but since I knew the approximate area where the camera was pointed, about 10° below and slightly left of Alrisha (Alpha Piscium, the knot joining the Cords of Pisces), I believe the field is centered near 67 Ceti, a magnitude 5.6 star at -6.3° declination (which was at 44° altitude, 183° azimuth at the time). Since geostationary satellites are nominally 22,300 miles above the equator, parallax from viewing them here at 40°N latitude makes them appear to be about 6.3° south of the celestial equator. I did not attempt to identify the specific satellites, but they have been marked on mouseover. Six of the nine labeled satellites are in a horizontal line with 67 Ceti, while three are up to a couple of degrees below below it. I'm not sure why that is. 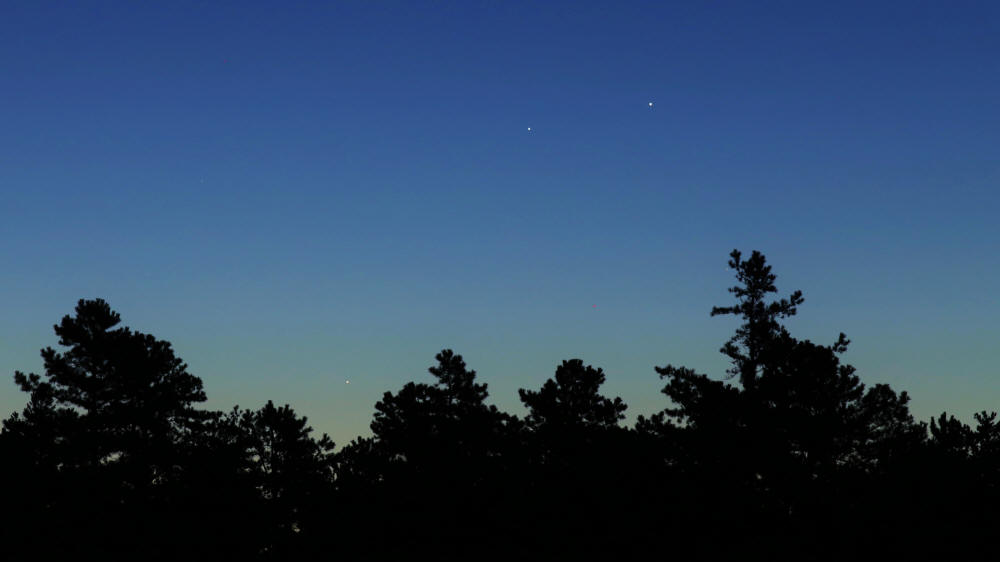 Mercury was near Regulus and Mars before sunrise on September 9, 2017. This picture of the trio was captured at 5:41 am EDT from Carranza Field in Wharton State Forest, NJ, 40 minutes after the start of astronomical twilight (5:01 am) and 53 minutes before sunrise (6:34 am). Mercury was 1.0° southwest (to the right) of Regulus (Alpha Leonis) and Mars was 2.5° east (below-left) of Regulus, which was 5.3° altitude at the time. Mouseover for labels. Mercury had  brightened significantly to magnitude +0.1, from +1.7 when observed on September 4, and was easily seen with unaided eyes once it cleared the trees at 5:30 am. It was still visible at 6 am when I left the field. Regulus (magnitude +1.4) and Mars (magnitude +1.8) were also seen with unaided eyes at the time of the picture. Taken with a Canon 6D digital SLR camera and a Canon 200 mm f/2.8L lens (on a fixed tripod), then cropped to about 70% of the original size, yielding a frame about 7.8° wide x 4.4° high. Exposed 1 second at f/5.6, ISO 800.

While waiting for Mercury and its companions to rise and clear the trees on September 9, 2017, I took this picture of Venus at 4:55 am. The moon, three days past full and still 89% illuminated, was high in the sky behind my right shoulder, so the field itself is illuminated in this long exposure. Venus, of course, is the brilliant object in the bottom-left quadrant at 9° altitude. It's in Cancer, just west (above) the border with Leo. Above, and slightly right of Venus, is Messier 44, the Beehive Cluster in Cancer. Towards the upper-right corner is the first magnitude star Procyon, and above it, Gomeisa. This pair forms the single-line stick figure of Canis Minor. Mouseover for labels. Taken at 4:55 am EDT with a Canon 6D digital SLR camera (on a fixed tripod) and a Tamron 45 mm f/1.8 lens, producing a field about 43° wide x 30° high. Exposed 6 seconds at f/4, ISO 1600 (that's about 4.5 stops more exposure than the Mercury-Regulus-Mars twilight image above).

Here's the sun at 1:33 pm EDT on September 4, 2017, showing a couple of prominent sunspot groups. The spots could also be seen with unaided eyes (using proper solar filtration of course). For most of this year, sunspots have been weak or nonexistent as we head to an expected deep solar minimum. Taken with a Canon 7D Mark II digital SLR camera and a Tamron 150-600 mm f/5-6.3 zoom lens on a fixed tripod, set to 600 mm focal length then moderately cropped. Exposed 1/3200 second at f/22, ISO 1600, through an ND5 filter, which yields a natural white color, but the sun was colorized with Corel PaintShop Pro. Focus and exposure settings are not optimum as I still need to improve camera technique in bright sunlight. Mouseover for active region labels.

Clouds developed early in the afternoon of August 21, 2017, the day of the total solar eclipse, although it was only a partial eclipse in the Philadelphia area, including Maple Shade, NJ, where this picture was taken at 2:25 pm EDT, 20 minutes before the maximum 75% obscuration. It's the only usable shot of the few captured during brief gaps in the clouds, streaks of which can be seen in the picture. Taken with a Canon 6D digital SLR camera and a Tamron SP 150-600 mm f/5-6.3 zoom lens (on a fixed tripod) set to 600 mm focal length. It was exposed 0.6 seconds at f/11, ISO 400 through an ND5 filter (ND5 = neutral density, 10^5 or 100,000x attenuation, about 16.6 photo stops). Update, September 7, 2017: The image was re-cropped to about 57% of the original size, and re-centered, yielding a field about 2.0° x 1.3°. The solar crescent was also colorized from its natural white with Corel PaintShop Pro.

For a collection of superb eclipse images, check out Jerry Lodriguss' site.

On August 20, 2017, the crescent Moon rose at 4:40 am EDT, 14 minutes after the start of astronomical twilight and 85 minutes before sunrise. This picture of it was captured at 5:16 am when it was 2.3% illuminated and 4° altitude as viewed from Carranza Field in Wharton State Forest, NJ. That morning's crescent Moon had a solar elongation of 17.5° and it was the last time it would be readily visible before the solar eclipse on August 21. It was 33 hr 14 min before new when the picture was taken with a Canon 6D digital SLR camera and a Tamron SP 150 to 600 mm f/5-6.3 zoom lens (on a fixed tripod) set to 600 mm focal length (not cropped). It was exposed 1 second at f/8, ISO 12,800 and  3600K white balance. The moon was last seen with unaided eyes, after first locating it with 10x50 binoculars, at 6:05 am from the side of a field next to Seneca High School on Carranza Rd. At 6:10 am, the thin crescent was still fairly easy in the 10x50s, but it could no longer be seen with unaided eyes. The moon was 32 hr 20 min before new when last viewed at 6:10 am. Click here for additional pictures from August 20 at 300 mm and 150 mm focal lengths.

Besides spotting the crescent Moon on August 20, 2017, I also wanted to see bright Venus, now with a backdrop of wintery constellations rising above the eastern horizon. Venus is below the recumbent stick figure of Gemini while the distinctive rectangle of Orion's stick figure, plus the three-star belt at its middle with the sword dropping from his belt, is near the right-hand edge of the frame. Taken with a Canon 6D digital SLR camera (on a fixed tripod) and a Canon 24-105 mm f/4L zoom lens set to 32 mm focal length, which yielded a field 58° wide x 41° high. Exposed 5 seconds at f/4, ISO 6400. Click here for a wider-field image taken with a 15 mm lens.

Click here for an index to previous SJAstro pages.