A couple of minutes after the picture was taken, Venus disappeared behind the thickening cloud bank above the western horizon. Venus was initially spotted at 5:51 pm with 15x56 binoculars, then it was immediately seen with unaided eyes. Venus (magnitude -3.9) shared the 4.5° binocular field with Mercury (magnitude -1.3), which was 2.4° from Venus at the 5 o'clock position. Mercury was not visible with unaided eyes.

This image of Omega Centauri (NGC 5139) was captured from Borton Landing Road in Moorestown, NJ (39.988°N), on February 27, 2018, at 3:01 am EST, 2 minutes after transit when it was at an apparent altitude of 2.8° (including atmospheric refraction) and 180.3° azimuth.  It was taken with a Canon 6D digital SLR camera and a Canon 200 mm f/2.8L lens (on a fixed tripod), providing a field about 10.2° wide x 6.8° high. It's a single frame exposed 2 seconds at f/4, ISO 2000, then lightly adjusted with Windows Live Photo Gallery. Omega is barely visible just above and to the right of the antenna on the right side of the frame (mouseover for labels). I didn't do a very good job of horizontally framing the picture since I was having a difficult time seeing the pertinent objects on the camera's view screen.

The image below is a crop of the area near the top of the antenna, better showing Omega. Compare it to a an image a little farther down the page taken at East Point on February 13 with the same cameras and lens (but not cropped). Because of suburban light pollution and a 90% illuminated moon at 20° altitude & 277° azimuth, the exposure for this frame was reduced by 3.7 stops, or 13 times less light gain, than the referenced image at East Point (otherwise, it would have been washed out). I was unable to see Omega with 15x56 binoculars in this very transparent sky; however, the stars Upsilon 1 & 2 and Zeta Centauri were easily visible with the binoculars. Of course, the visibility of an extended object, like Omega, is more sensitive to the detrimental effects of light pollution. So, I have an image, but no visual sighting (yet) from this latitude. I should have taken my 85 mm spotting scope.

Update: On March 13, 2018, I went to Borton Landing Rd again, arriving shortly before transit at 3:00 am EDT. The sky was quite clear, there was no moon and I used the tripod-mounted 85 mm spotting scope at its full 27 to 60x magnification range. I believe I saw a faint smudge above the antenna in the appropriate position for Omega Centauri, but it was at the borderline of visibility, reminiscent of my first very faint view of Comet C/2012 S1 (ISON) in late September 2013. I was hoping to see the two stars, magnitude 6.2 and 6.8, about three-quarters of a degree below-right of Omega to confirm the sighting (they're plainly visible in the picture below). However, I couldn't spot them, but I also discovered back home that I was looking much too close to Omega in the scope. In any case, I think the view from Moorestown was too tenuous to be claimed as a true sighting. At best, it should be appended with a deprecating asterisk. Omega is certainly a tough nut to crack in suburban skies at 40°N latitude!

This is a crop of the original Omega Centauri image above, showing an area about 2.5° square near the top of the antenna, which is 4,500 ft or 0.85 miles away at the Lockheed-Martin complex. The vague haze of Omega is more recognizable in this view, and the nearby field stars match those in the East Point image from February 13. Mouseover for labels. 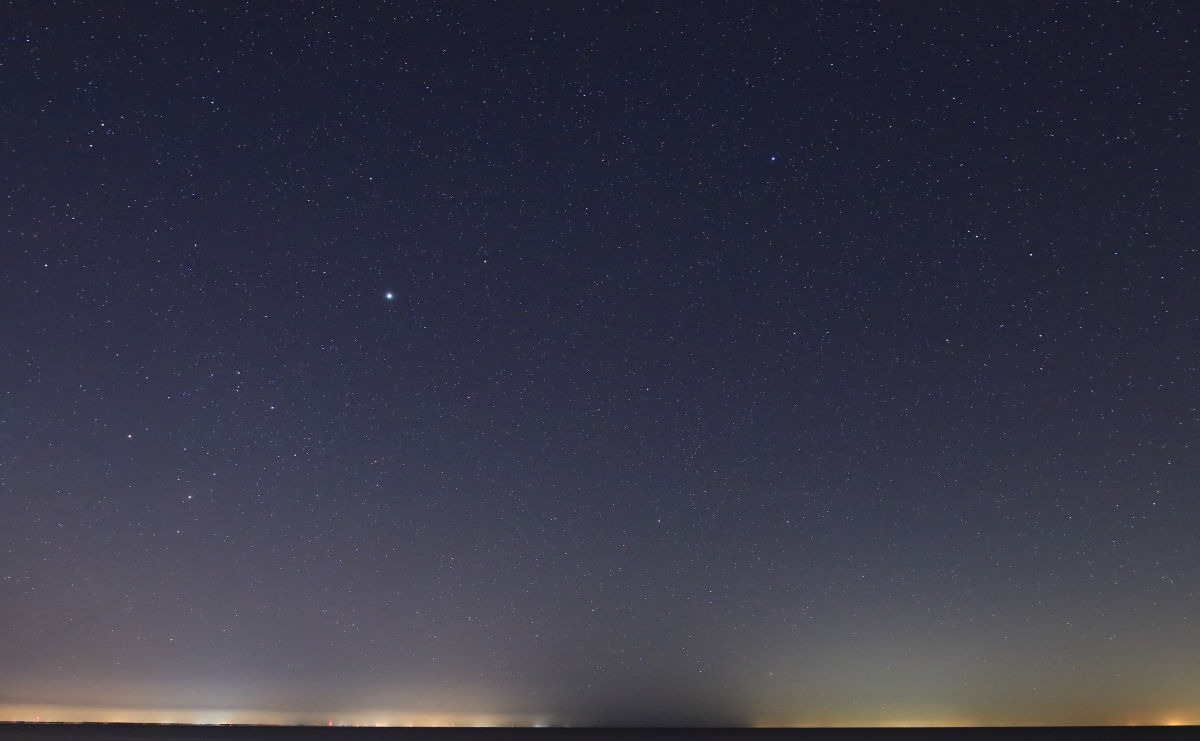 This view looks south over the Delaware Bay from East Point, NJ, on February 13, 2018, at 4:11 am EST. The thin dark band at the bottom is the bay itself, while distant lights and glow just above the bay represent the southern peninsula of New Jersey on the left and the state of Delaware on the right. The dark area slightly right of center is over open water between Cape May, NJ, and Lewes, DE, where it looks through to the Atlantic Ocean. Taken with a Canon 6D digital SLR camera (on a fixed tripod) and a Sigma 20 mm f/1.4 Art lens, then lightly cropped for a field about 77° wide x 53° high. It was exposed 15 seconds at f/4, ISO 6400. The raw image was processed, and its size reduced, with Canon's Digital Photo Professional.

The purpose of this trip to East Point was to see the great globular cluster, Omega Centauri (NGC 5139), which is usually an object for observers much farther south. From East Point, latitude 39.2°N, Omega Centauri at 47.5°S declination transits the meridian at a mere 3.5° altitude (including a little atmospheric refraction). So, it can be seen from here, but it's not always easy to do, and sometimes impossible, unless the sky is relatively clear along the southern horizon. The sky on the morning of February 13 was one of the best this observer has seen at East Point, so Omega was easily spotted with 15x56 binoculars moments after arrival about 3:40 am. It can also be seen faintly in this wide-field view. Omega would transit at 3:55 am and was at 183° azimuth when this image was captured at 4:11 am. In the 15x56s, Omega was larger and brighter than M4 (near Antares, around 15° altitude), and it was larger than M13, the Great Globular Cluster in Hercules, but M13 was brighter, especially at the core, than Omega; however, M13 was much higher in the sky, nominally 55° altitude in the east. Mouseover for labels.

Also present (and easily visible with unaided eyes) are the planets Jupiter (the brightest object in the frame) and Mars. Mars was at formal geocentric conjunction in right ascension with the star Antares, the similarly reddish "rival of Mars," on February 10. They had their closest visible approach for NJ observers on the morning of February 12, but it was cloudy. As seen here on February 13, they were at an apparent separation of 5°09', just a few arc minutes farther apart than their minimum separation for this appulse. Both were at magnitude +1.0, so the brightness and color were a good match. The match between Mars and its rival was further improved by good seeing which minimized the usual twinkling of Antares. Before leaving about 4:50 am, Saturn was spotted with unaided eyes low over the southeast horizon (its elongated shape, because of the rings, was confirmed with 15x56 binoculars).

The images below show a closer view of Omega Centauri, taken with a 200 mm lens. 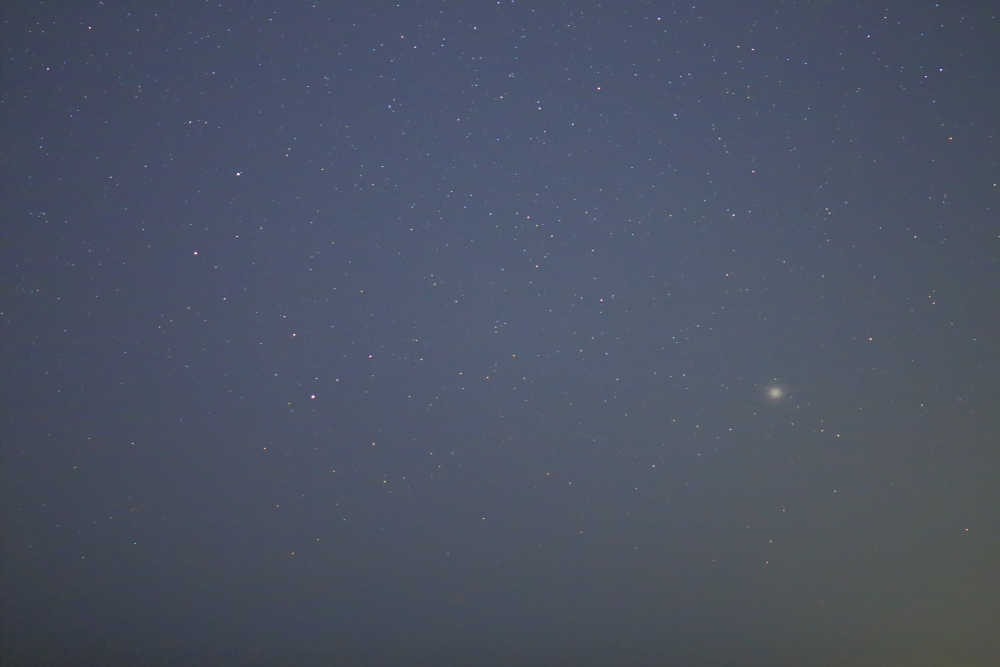 This image of Omega Centauri on February 13, 2018, was captured at 3:57 am EST with a Canon 6D digital SLR camera and a Canon 200 mm f/2.8L lens (on a fixed tripod), providing a field about 10.2° wide x 6.8° high. It's a single frame exposed 4 seconds at f/2.8, ISO 6400. The raw image was processed, and its size reduced, with Canon's Digital Photo Professional. It shows several of the stars I use as a guide to finding Omega with binoculars (the lines mirror those in the initial wide-field image. Mouseover for labels.

This wide-angle view of the area near the long-period variable star Mira, or Omicron Ceti, was captured on January 23, 2018, at 7:50 am EST from Maple Shade, NJ, with a Canon 6D digital SLR camera and a Canon 100 mm f/2.8L marco lens. It was cropped to a 16:9 ratio (86% of the width x 73% of the height) for a field about 17.5° wide x 11.6° high. Mouseover for labels. Mira was at 41° altitude and the 41% illuminated moon was only 14° away, just outside the upper-right-hand corner of the frame. Unlike most of my snapshots, which are parallel to the horizon, this view is with the camera tilted about 60° clockwise to better fit the line from Menkar to Mira.

Sue French's Sky & Telescope article from October 2017, The Inconstant Star, predicted Mira would be reaching peak brightness in January 2018, which prompted me to take a look at it, which I did on January 13, 2018, from my light-polluted suburban backyard. I first spotted it with 15x56 binoculars, starting at Hamal and Sheratan in Aries, which "point" to Eta Piscium. From there, I go down the eastern rope of Pisces to Alrischa, the knot in the ropes (which is the southern vertex of the V-shaped ropes), then jump 7° southeast to Mira. When bright, Mira is fairly unmistakable, but to confirm, I look for a diamond-shaped asterism as shown in the mouseover. There's a double star at the corner opposite Mira. I couldn't remember for sure if I saw it with unaided eyes, so I went back out the following night, January 14, and confirmed that it was indeed visible with unaided eyes from my backyard.

On January 17, 2018, Bob King posted the article Mira Makes January Nights "Wonderful" at S&T online, and Mira was a topic at the January 19 meeting of the West Jersey Astronomical Society. Roger Cowley discussed making magnitude estimates for Mira at the meeting. That's an area where I don't feel qualified, but nonetheless, I took a stab on January 20 around 6:45 pm. Using 7x42 binoculars because high, thin clouds made it difficult to see Mira with unaided eyes. I thought it looked dimmer than Menkar (magnitude 2.5 per SkyTools), brighter than Delta Ceti (magnitude 4.1) and about the same as Gamma Ceti (magnitude 3.5). One caution, Gamma is mostly white in color (B-V = +0.09) while Mira is definitely reddish (B-V = +1.42). The brightness differences don't show well in this wide-field snapshot. At the time, magnitude estimates for Mira at the AAVSO were running around 3.5 too, but by the end of January, the were in the low 3's, so we're still near the peak.

Another red gem of the winter sky is Hind's Crimson Star, or R Leporis. It's relatively easy to find not far below Rigel in Orion (finder chart). As of this writing (early February 2018), R Lep is running a little brighter than magnitude 9 based on recent AAVSO estimates, so it's a challenging object for binoculars in a suburban sky. Here's a current light curve.

The planets Jupiter and Mars were captured on January 3, 2018, at 5:24 am EST from Maple Shade, NJ, with a Canon 7D Mark II digital SLR camera and a Canon 200 mm f/2.8L telephoto lens on a fixed tripod, then cropped to 71% of the original frame for a field about 4.6° wide x 3.1° high. This image was exposed 1 second at f/3.5, ISO 3200 and 4800K white balance. At the time, Jupiter and Mars were 1°40' apart as Mars was catching up to Jupiter towards their appulse, when on the morning of January 7 for NJ observers, they would be a quarter-degree apart. Also visible are Jupiter's Galilean satellites, Ganymede and Callisto, which are 4' and 6.5' from Jupiter respectively. At the time, Io and Europa were being occulted by the Jovian disc. Mouseover for labels.

Click here for an index to previous SJAstro pages.