On April 16, 2016, the planet Mercury was observed at Carranza Field in Wharton State Forest, NJ, from 8:02 pm EDT, when it was spotted in brightish twilight with 10x50 binoculars, then with unaided eyes a minute later. It was followed with unaided eyes while I snapped pictures of it until 9:00 pm when reached the treetops. Sunset was at 7:38 pm, astronomical twilight ended at 9:15 pm and Mercury set at 9:23 pm. Mercury has now dimmed to magnitude -0.03 per SkyTools, magnitude -0.2 per USNO's MICA software. This image was captured at 8:46 pm when Mercury was at 6.3° altitude. Besides Mercury above the trees, two distinctive open star clusters in the constellation Taurus are present, The dipper-shaped Pleiades (M45) are above-left of Mercury, while the V-shaped Hyades, with the bright star Aldebaran, are above left of the Pleiades. Taken with a Canon EOS 6D digital SLR camera (on a fixed tripod) and a Canon EF 24-105 f/4L IS USM zoom lens set to 50 mm focal length. It was exposed 2 seconds at f/5, ISO 1000, automatic white balance. Mouseover for labels.

Here's a wider view at 9:00 pm EDT, when Mercury was at 3.9° altitude. Same camera and lens as before, but set to 24 mm focal length. It was exposed 6 seconds at f/5, ISO 1250, 3600K color balance. Besides Mercury just above the tree tops, the constellation Orion is on the left, Taurus (with the Hyades and the Pleiades) is at the center, and Perseus is at the upper right. Carranza Field itself is in the foreground, illuminated by the gibbous moon (78% illuminated) high above the left shoulder of the photographer. The bright area above the trees near Mercury is some residual twilight plus glow from Philadelphia, PA, 30 miles away, and the intervening suburbs. Mouseover for labels.

On April 10, 2016, the crescent moon occulted (passed over and covered) the star Aldebaran between 6:47 and 7:57 pm EDT at my location in Maple Shade, NJ. Sunset was at 7:34 pm. Unfortunately, clouds arrived late in the afternoon and the disappearance of Aldebaran was not observable. Subsequently, I wasn't paying close attention to the sky and didn't realize the clouds had cleared until shortly before reappearance. By time I got out and set up the camera, Aldebaran had already emerged from the lower-right trailing limb of the moon. The pair of stars to the left of the moon are Sigma 1 & 2 Tauri. Here's the first frame I took at 8:02 pm using automatic exposure and a quick manual focus. Taken with a Canon EOS 6D digital SLR camera (on a fixed tripod) and a Sigma 70-300 mm f/4-5.6 APO DG lens set to 300 mm focal length, then cropped to around half of the original size (the field is about 3.1° wide x 2.3° high). Exposed 1/5 second at f/5.6, ISO 800, automatic color balance.

On April 10, 2016, comet 252P/LINEAR was observed in a clear, moon-free sky from Carranza Field in Wharton State Forest, NJ. It was a fine sight in 16x70 binoculars, but I could not spot it with unaided eyes (M13 and IC 4665 were not visible with unaided eyes either). This image of 252P was captured at 3:41 am EDT with a Canon EOS 6D digital SLR camera (on a fixed tripod) and a Canon EF 100 mm f/2.8L macro lens, then cropped to about 75% of the original size, so the field is about 15° wide x 10° high, almost entirely within the constellation Ophiuchus (a small corner of Serpens Cauda intrudes below the pseudo-constellation, Taurus Poniatovii). It was exposed 5 seconds at f/2.8, ISO 12800, 3400K color balance. 252P has moved 4° north since last observed near M14 on the morning of April 6th at Coyle Field (mouseover for labels).

On April 8, 2016, the Crescent Moon and the planet Mercury were 7½° apart in the evening twilight over the western horizon after sunset. This view was captured from Swede Run in Moorestown, NJ, at 8:23 pm EDT, 51 minutes after sunset when the 3.4% illuminated Moon (36 hr 59 min old) was about 8° altitude while magnitude -1.0 Mercury was about 5° altitude (mouseover for labels). Taken with a Canon EOS 6D digital SLR camera on a fixed tripod and a Sigma 70-300 mm f/4-5.6 APO DG zoom lens set to 135 mm focal length. Exposed 0.6 seconds at f/8, ISO 1600, daylight color balance. See the APOD of 15-April-2016 for a similar (but more scenic) picture taken from Lisbon, Portugal, on the evening of the same date. The motion of the moon with respect to Mercury over the course of the five-hour differential between Portugal and the East Coast of the United States is readily apparent (nominally, the moon moves eastward its own half-degree diameter every hour; Mercury moved about 22 arc minutes eastward during that time).

Here's the Crescent Moon at 8:37 pm EDT, after Mercury dropped behind the trees. The moon, with prominent earthshine, is now about 5° altitude. The star 2° above-left of the moon is Mu Ceti (mouseover for labels). Fainter 31 Arietis is above-right of the moon (not labeled). The moon itself is in Aries, but the limb at the lower-left cusp is only a few arc minutes from the border with Cetus. Taken with a Canon EOS 6D digital SLR camera on a fixed tripod and a Sigma 70-300 mm f/4-5.6 APO DG zoom lens set to 300 mm focal length. Exposed 1.6 seconds at f/8, ISO 1600, 3400K color balance. 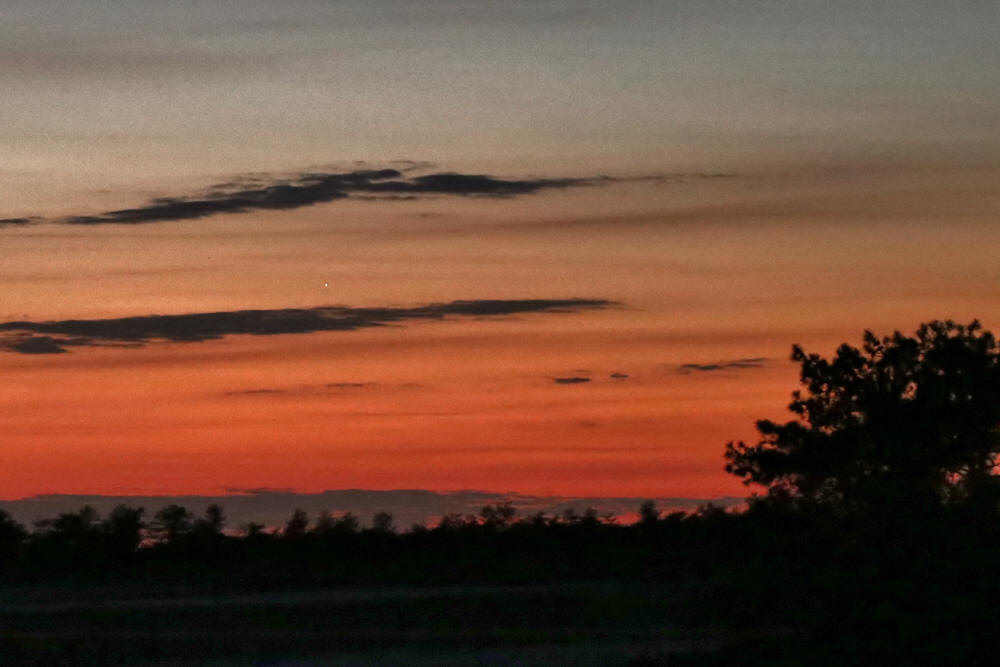